I’ve released v0.2.14 of the Muuri storyview
It has the following changes: 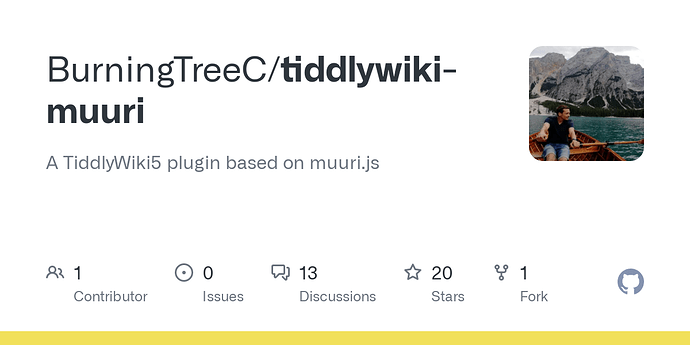 A TiddlyWiki5 plugin based on muuri.js. Contribute to BurningTreeC/tiddlywiki-muuri development by creating an account on GitHub.

As now I’d like to invest some time into the development of the Muuri storyview I’d like to get some feedback if there are users using it and how they get by it.

As always, I welcome ideas and bug reports

This is pretty cool, I remember seeing it before but thanks for the reminder. I just opened it on mobile and it’s difficult to fund screen area for me to “scroll”. If there was smaller drag n drop areas (even if it was just for mobile) that’d be an idea? You might not be worried about mobile with this though. Cool project!

Well for mobile use it’s difficult to scroll, I know and it’s true that I don’t worry much about it

I have mostly used Muuri Kanban, but I love to play around with Muuri Storyview. It looks so impressive with a few of my more decorative tiddlers from my other TWs. Trying to tempt some friends into using TW.

I still remember the shock I got when seeing it for the first time. So beautiful and so different. I hope for some ideas from users to make good use of it. I think that is what we need.

This is amazing! I like the fact that I can view many tiddlers on the screen without scrolling.

When you open a tiddler, the tiddler would turn black for a moment and then becomes normal white color (with vanilla palette). I guess the purpose is to show the user which tiddler is being active. But I find this a little distracting especially when you open many tiddlers quicky. Is it possible to customize this animation (change color/reduce flashing time) or disable it altogether?

Edited: Ok I think the animation corresponds to “Animation duration” setting of the wiki. So reducing this value to a small number will reduce the flashing time. A little animation is nice but the transition from black → white is kinda eye hurting. Would love to be able to set it to pale-yellow → white or other smoother color transition.

I think I’ll make the animation an opt-in configuration with the next releasee, but for now you can add the following to a Stylesheet tiddler to disable it:

Alternativelly, you can choose a different color than tiddler-background for this (I chose foreground which might be a bit too eye-hurting)

I have mostly used Muuri Kanban, but I love to play around with Muuri Storyview. It looks so impressive with a few of my more decorative tiddlers from my other TWs. Trying to tempt some friends into using TW.

I still remember the shock I got when seeing it for the first time. So beautiful and so different. I hope for some ideas from users to make good use of it. I think that is what we need.

Thanks @Birthe - yes in fact the muuri storyview can be used to play around with it. It’s as simple as

The configuration options are many, which may hold users off from using this, but there are only some really needed, the others are optional

There’s a new Release now (v0.2.15) which allows to opt-in / opt-out of the navigate-to animations
One can also change the colours of the animation

The storyview now also preserves the scroll position of the window over refresh cycles, which means that if we for example edit a tiddler, the window will no more jump to the top and then scroll to the Draft tiddler but it will stay at the same position, which makes things smoother

Just updated the version 0.2.16. Thank you for implementing the option to customize the color animation. It works great!

Thanks for your feedback @Pak !

Meanwhile I’ve released version 0.2.18 which makes it possible to use the storyview in new windows and in Modals, too

Great! Just a quick small bug report. Occasionally, when I open a new tiddler it would be partly overlapped by an existing tiddler. Here I just opened “I am Mr. Van Gogh” and the bottom part is covered by the existing “Start me on GitHub” 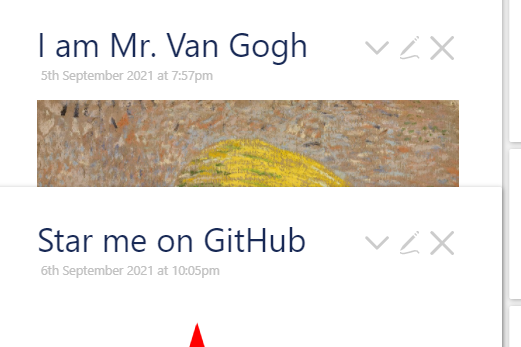 It does not happen every time and I’m not sure how to reproduce it. But it does happen from time to time.

Another nice feature to have is the “Kanban style” for the whole storyriver (rather than in a single tiddler).

Hi @Pak and thanks for your feedback
I remember that I have encountered this bug before, but I haven’t been able to reproduce it neither consistently
But I’ll investigate

Another nice feature to have is the “Kanban style” for the whole storyriver (rather than in a single tiddler).

That would be a nice feature to have but it would also present me some issues that I’m unable to solve right now, like popups being hidden underneath adjacent columns for example

But I understand the concept you have in mind and I already tried creating a prototype, but it has some issues and is not presentable

That said, I believe the standard muuri layout with the single tiles one beneath the other is the best solution that can be achieved with the muuri storyview

The overlap is only seldom seen now. I saw it more in earlier versions. To me it looks like it is not totally finished reading and positioning everything. Refresh and it goes away - but now is rather slower - we can see it kind of slide into place - where the problem were seen last refresh. (Sorry it is difficult to describe).

I love the Kanban as it is now. It looks good, works well - and is understandable to people not into Tiddlywiki. (I know because I also took the “Do the laundry” idea from you - it has to be done" - guess what? It worked my friend did it - not even complaining.

I am curious to know if you’re still maintaining the Muuri StoryView plugin in light of the recent work on the [multi-column/multi-river layout plugin].([MCL] Let's do it - #17 by TiddlyTweeter)

For a few reasons, I think this plugin is better suited to my use case. I tried to install on latest and on pre-release and I wasn’t very successful. Is there a step after installing the plugin I need to do? (the layout seems to be correctly set to the Muuri layout