Woah! Thank you @btheado ! Like @Mark_S I use rclone all the time but never knew about this feature.

As discussed in that post, I have added a short tutorial using WebDAV on windows in TW-Scripts!
one reason for me to use it is using TWs on a small home network and also access to my local libraries like kookma library, wikilabs, rlinks, and other libraries stored on my local computer!

I think for private use WebDAV is really cool!

Adding a link here to @Mohammad’s tutorial for convenience:

I saw you have starred GitHub - dom111/webdav-js: A simple WebDAV client written in JS for use as a bookmarklet, or integ
Can this be used directly for TW also? or it need some JS coding?

@Mohammad It is not meant for TW.

While the “WebDAV” part is somewhat not obvious, you might consider including the SharePoint/ASPX saving option as if you have it available is absolutely the simplest.

That’s it, no further configuration necessary - works on desktop and syncs with mobile where it works great! I know the subset of users with OneDrive for Business/SharePoint might be small (or at least not vocal here - me and @TW_Tones anyways). I will acknowledge that as we’ve discussed before, I have heard that some configurations of SharePoint have had the WebDAV piece disabled, so maybe it’s risky to talk about too much, and have users in that situation get frustrated…

Great stuff. @stobot’s SharePoint/ASPX process is really incredibly cool, and should be more widely known. I suppose generally it would be useful to update tiddlywiki.com with some of this stuff.

Several WebDAV hosting services tested (box.com, swissdisk.com) don’t support accessing HTML files via a webbrowser, so they won’t work with TiddlyWiki. However, The GMX mediacenter (www.gmx.net) has been reported as working with WebDAV with a free account.

Both box.com and swissdisk.com have a line through them. I don’t know what this means. Does it mean that box and swissdisk work? Have been tested but don’t work? Haven’t been tested? Do they need to be mentioned at all?

More importantly, are there any actual free servers that still work? I’m thinking only the line about gmx.net is worth retaining. If you were to list all the services that don’t work, I imagine it would be several pages long.

That’s it, no further configuration necessary - works on desktop and syncs with mobile where it works great! I know the subset of users with OneDrive for Business/SharePoint might be small (or at least not vocal here -

The existing notes at TiddlyWiki.com say SharePoint/OneDrive on Windows. Does it actually work on Mac as well?

Good question @Mark_S, unfortunately I don’t have a way to test, I only have access to windows-based machines.

Edit: Might be worth mentioning… once there I can edit completely normally from my phone as well (Android based)

The existing notes at TiddlyWiki.com say SharePoint/OneDrive on Windows. Does it actually work on Mac as well?

I edited the wiki post and attempted to clarify client vs. server platform. I moved the SharePoint bullet point to the Windows section, since SharePoint itself runs on Windows. But as with all the WebDAV servers, it doesn’t likely matter which platform you are connecting from.

@btheado FYI: SharePoint can run in any browser on any platform so it is not bound to windows at all.

The server may be installed on a Windows server but most people are now starting to use the cloud hosted Office 365 Platform and its SharePoint there in.

The Office 365 platform, Rather than SharePoint, is I believe actually what can serve content on top of WebDav protocols. Previously this was limited to Internet Explorer, so I am not sure what the status is now, I presume “MS edge”.

Also One Drive has clients for other OS’s as well.

Use WebDAV for saving a single file wiki

FYI: SharePoint can run in any browser on any platform so it is not bound to windows at all.

@TW_Tones , yes that’s why I wrote this:

The “platform” below refers to the platform on which the WebDAV server runs. The TiddlyWiki WebDAV client code runs in the browser and is completely cross platform.

But as with all the WebDAV servers, it doesn’t likely matter which platform you are connecting from.

Is there a way I can write it more clearly?

I think the Sharepoint entry in that post is an outlier. The other entries all assume you want to run your own WebDAV server. But with Sharepoint I’m guessing (I’m not well informed) that an end user is not likely to to spin up their own instance. But I expect any client platform can connect to any server platform.

We need someone who uses a Mac and also uses Sharepoint to confirm or deny that TiddlyWiki files automatically save. And if it needs a special browser. Though if it works with Edge, I would expect it to work with Chrome, since both are Chromium based.

At least on Windows I’ve tested on Edge, Chrome, and Firefox and all work fine. IE failed (not surprisingly)

I had trouble with Micromata Dave on my windows 10, so tried Mohammads well documented “hacdias webdav server”. I obtained the binary from the github releases, Unfortunately the webdave.exe kept disappearing until I noticed this report. 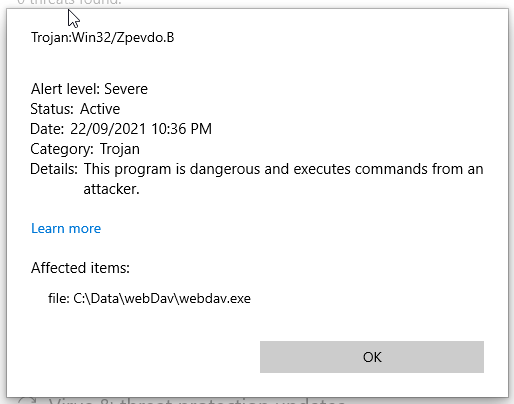 What shall I do?

I did raise an issue https://github.com/hacdias/webdav/issues/93 but shall we remove it from here and Scripts in Tiddlywiki — codes, macros, and solutions in TW until its resolved

I have a Mac Mini (I am not using so much) and a SharePoint on O365 so I can document this and have in GG before.

Almost certainly a false positive but I will remove it from the wiki post for now.

You may use the amd64 version, except you have a very old hardware.