If there is a plugin or a macro that can already do what I’m trying to do here with Tidgraph, please let me know!

(i.e. the ability for a BASIC program to transclude BASIC code from another tiddler.)

I’ve since been thinking about how to set something up to eliminate the possibility of unintentionally transcluding the same tiddler more than once (say two tiddlers being included into my BASIC program each transclude a common tiddler.)

Not a problem that would normally matter in TiddlyWiki (content duplication), but it is the kind of thing that will cause an error in a BASIC program if, say, a same function/subroutine/variable/constant is duplicated.

As I chew on how to automagically eliminate duplicate transclusions, I have at least a prototype of viewing such a problem when one exists.

Main Tiddler’s text body has:
(include A)

Both tiddlers A and B have:
(include C)

Tiddler C has:
(include Main Tiddler)

Tiddler D has:
(include A)

Again, if anybody knows of another way to get this information (graph or text-only, either are A-1), please let me know!

Something I had tossed aside until I fine-tuned the “include” metacommand in BASIC Anywhere Machine.

I can’t see me setting up some kind of process to skip transclusion of an already transcluded tiddler. I figure the simple approach is to provide the ability to see the transclusion hierarchy and identify problems that way when the BASIC interpreter complains about duplicate code.

A red line with yellow highlight indicates a problem. The content of “huh?” will get transcluded twice into Amazing Grace (once via “Hz#(note$)”, and once via “howdy”. The interpreter will give an error at runtime about duplicate functions, variables, or whatever is in “huh?” 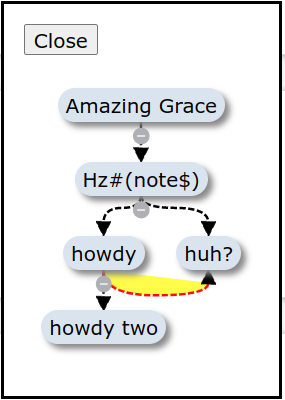 Here’s the updated code that generates the graph: