Export Discourse content as a CSV and import into TiddlyWiki

I have a Discourse forum allthebest.recipes that started as a TiddlyWiki, migrated through other wiki types, and now I’m deciding that running an entire Discourse forum for just me doesn’t make much sense, so I wanted to figure out (1) how to export all the content, and then (2) how to import into TiddlyWiki.

I got @joshuafontany’s JsonMangler working for CSV import after much trial and error, and uploaded the transformed tiddlers into my twgroceries#Data/ATBRecipes.

Various other tips from Joshua in an old thread (mail-archive.com) were helpful in getting started.

How to Export from Discourse

Discourse has a Data Explorer Plugin which lets you run SQL queries directly through the web interface. I think

This gets you the title, the “raw” text (so unrendered markdown), date it was created. I didn’t bother with tags or anything else. I called it dateposted to not collide with the default created field in TiddlyWiki. There’s probably a correct way to do this so you can actually preserve the created timestamp in TW directly. title and text are the correct field names in TW.

It then grabs all the comments (topics) as follow ups to the original post, and filters out private messages.

Then it matches only things that I posted, and filters by a handful of categories.

This can be exported as a CSV or a JSON file, and I chose the CSV version so I could more easily edit in bulk if needed.

How to Import into TiddlyWiki

I used the JsonMangler demo site directly for the following steps.

Set the type to application/csv

Open the CSV file on your computer in a plain text program like TextEdit on Mac or Notepad on Windows and copy the entire contents.

Paste into the empty tiddler, give it a name related to your data, in my case atbrecipes.

Hit the checkmark to save the tiddler, and it should be transformed into rows like this: 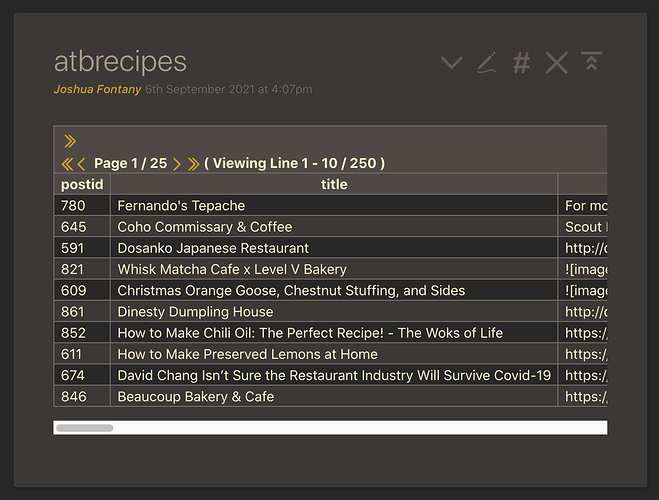 The disclosure triangle at the top of the CSV tiddler can be opened to reveal a bunch of options. 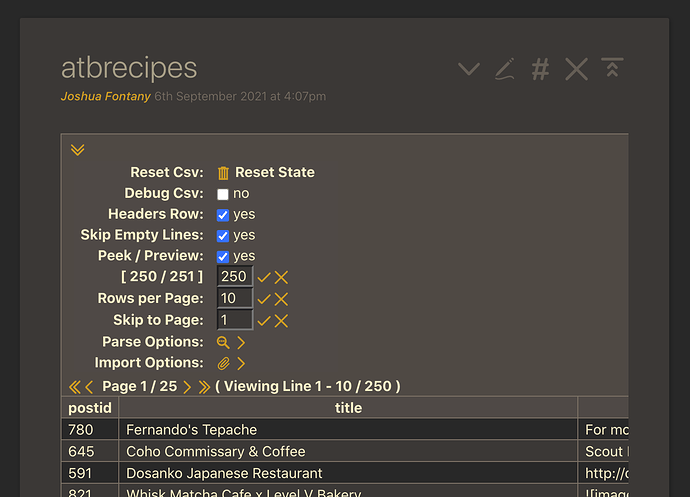 And inside that, the Parse Options and Import Options have sub settings as well: 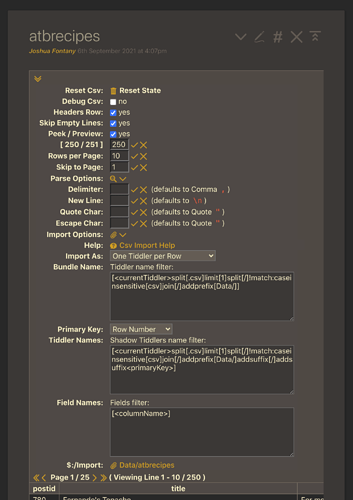 For Bundle name, the import line at the bottom will live update with what the name is. The default is fine.

For the Primary Key drop down, your columns will be listed, starting with Column 0. In our example, Column 0 is the unique postid of the Discourse forum id – which applies to both “first posts” and replies. Column 1 is the title of the post, and we’d like to have that be the name of the tiddler.

For Tiddler Names, the Shadow Tiddlers name filter I edit to be:

Because I’ve selected Column 1, which is the title field, the tiddlers will be named as the post titles in Discourse. Note: comments will overwrite first posts on import – need a solution here to append postid or row number to the title from Column `

Click on the name of the file at the very bottom next to Import (Data/atbrecipes in the screenshot) and this will pull up the standard import dialog. Go ahead and run the import and click on the imported tiddler.

You now have a plugin filled with Shadow Tiddlers, timestamped with the time of your import, which looks something like this: 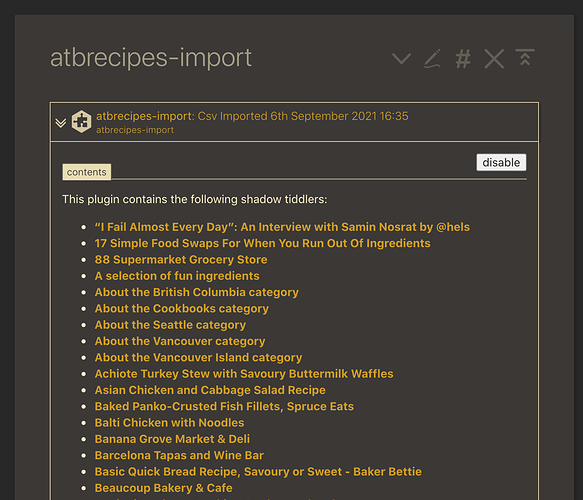 Now you can drag and drop this plugin tiddler into a wiki of your choice, and it will import all these tiddlers as Shadow Tiddlers. From the csvImport help file:

In these modes each individual row is rendered to a tiddler, then these tiddlers are packaged as shadow-tiddlers into a plugin. This takes advantage of the shadow-tiddler features such as replaceing an import all-at-once, comparing multiple snapshots, overwriting and restoring shadow tiddlers, etc.

Here is an example imported tiddler, showing the fields that were imported:

Below are some issues and improvements that could be made, either on the TW side or in constructing the SQL query to get the right output.

Uploads in Discourse in the raw mode look like upload://cfANkmI0Du5wBvkR6WhzruGeY3R.png. This needs to get turned into image paths like https://talk.tiddlywiki.org/uploads/default/original/1X/55dd56118b52a85be63871975eda26087ae1d88f.png. But that will of course not work offline and will point to the “live” server, which is not ideal. The Discourse backups function includes an export of all uploaded files that could be extracted.

(TW) Use the Markdown plugin and properly label as Markdown tiddlers

(SQL) For multi-user Discourse forums, include the username as a column named “creator” to automatically go in the right field for TW.

(SQL + TW) Include a field or tag or something so that replies are applied. I guess the core Comment plugin might be used too?

(SQL) Have sample SQL so just “first posts” are included.

(SQL) Include tags and categories, turn them both into TW tags.

(SQL + TW) The dateposted is a string right now. Could have it be the created core field, just need to transform that string into one that works with TW

Thank you @joshuafontany for a VERY full featured plugin. I hope that this write up helps others to use it.

I found one error with a missing link that I filed as a Github issue:

For all you TW exports experts out there, I am stuck at one point where for Tiddler Names the filter of:

Means that comments on a post (which has the same post title in Column 1, but a different postid and of course different text) overwrites the post that has the same title.

What I need is a TW filter in this context that adds either the unique row number of the CSV or the unique postid of Column 0. Anyone? (this may be easy for @joshuafontany to answer!)

I have uploaded my source CSV file to my site here twgroceries#atbrecipes-postids.csv if anyone wants to experiment.

And, of course, I’ll install the Data Explorer plugin here on this site, and let people experiment with this directly with the content from this site. Permissions can be set so certain queries can be accessible to groups. Please leave a comment if you’d like to experiment, and we’ll add you to this data explorer group when it’s installed.

Ooh, thanks for showing a great use-case for JsonMangler. I’ll reread this later today & see if we can’t fix the comments.

Thanks so much for this work and documentation. I do not have a need for it now but the fact this is possibility is in my view a big plus for Discourse, and stands to assist in the extraction of content to build curated community resources with the minimum of effort.

What I need is a TW filter in this context that adds either the unique row number of the CSV or the unique postid of Column 0. Anyone?

Have you considered making use of the new unused title macro?

I am confident could build the filter equivalent of the unused title macro also if you wanted.

The ideal formula would be if Joshua or someone can let me know how to access other columns in the CSV. Post title plus post ID would be unique, I just don’t know the CSV import to know what is available in the loop.

course, I’ll install the Data Explorer plugin here on this site, and let people experiment with this directly with the content from this site. Permissions can be set so certain queries can be accessible to groups. Please leave a comment if you’d like to experiment, and we’ll add you to this data explorer group when it’s installed.

Coming back to this, I actually don’t think you can access the other column data for the row being processed via wikitext/filters. The conversion is handled by the PapaParse library behind the scenes, and I need to feed all the config options at once. Unfortunately, TW5 has no native {{title##row$$colum}} notation or equivalents to use in filters before triggering the conversion.

Looks like some creative SQL work for a title column would be your best option atm.

Great, thanks for letting me know! This unblocks me from hoping there is a magic TW filter, as there often is!

I can of course also put “title” in a different Tiddler field, and just use postID or row number in there, but you’re right, learning the SQL to concat title + postID is probably doable, too.